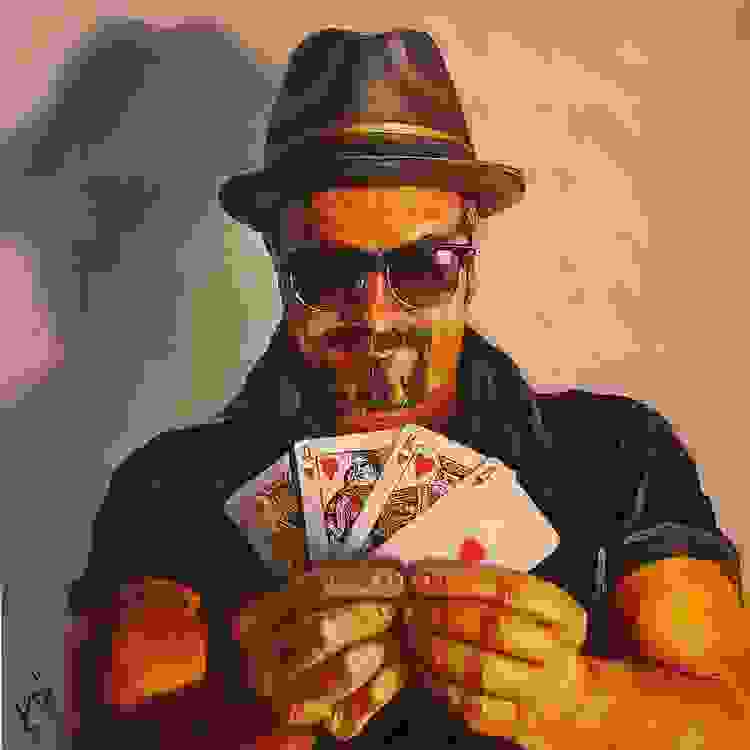 A sage of pop culture and a masterful narrative painter, artist Kevin Peddicord takes us on a journey through the genres of cinema and music with the skills of a storyteller.

Kevin Peddicord was a fervent youth, constantly drawing, looking at art to emulate, and teaching himself new skills. Despite a lack of technical expertise among his teachers to advance him further in the arts at a young age, Kevin pursued his passions for art independently. He studied the design and figurative styles found in comics and dove deep into the study of subjects and styles that interested him. Strongly influenced by other artists, Kevin studied copies of the work of artists such as Frank Frazetta, the 1960s father of fantasy art and illustration, and Gene Colan whose work he emulated for its’ composition, style, and cinematic quality.

Post college, Kevin flourished in a career in commercial art. He worked for various agencies and honed his chops at commercial illustration, learning a variety of media techniques from ad design to animation drawn by hand, frame by frame. Among his many contracts, he created art for the U.S. Army, the Carolina Hurricanes, wrestler Randy Savage, Major League Baseball Hall of Fame player Eddie Murray, and the Durham Bulls. Eventually, Kevin would come to fruition on his own unique abilities and personal interests and his desire to show the world a humorous side as a narrative storyteller and sage of pop culture.

After nine years in printing, in addition to creating an Art Department at Litho Industries, Kevin created his own business,The Vision Vault, Inc. Although the next five years were enormously busy, his freelance graphic design work began to taper off in 2005 and he soon found himself rediscovering oil painting. A fan of figure artist Skip Liepke and his narrative paintings of people in bars and other settings, Kevin was hooked on the idea of paintings with timeless subject matter and so began to explore aesthetic elements to produce that type of quality in his work. From here, Kevin’s narrative paintings were born. Still today, Kevin places himself as his own subject reference from time to time by first photographing himself in the scenes, often with props, some makeshift and some actual, then later painting in more elaborate details. Around 2006 Kevin’s paintings emerged as more conceptualized and he began to blend his love of vintage things with his pun-heavy, wry humor, both of which are evident signatures of his paintings today.

Kevin is inspired by cinema and his favorite genres of universal horror and German expressionism, known for its dramatic camera angles and shadows. Much of his work depicts the 1920s through the 1940s, a classic time in fashion, cinema, and politics, while other works span decades which he might occasionally co-mingle into impossible yet related realities. A big fan of Hunter Thompson, author of the acclaimed Fear and Loathing in Las Vegas and his signature quote “When the going gets weird, the weird turn pro” Kevin parallels this quote, describing it as “a great way to describe my interest in the weird and also the explanation I have to provide for my work.”

Kevin’s paintings, best known for their pop culture narrative, have been exhibited widely around North Carolina. He lives in Raleigh with his wife Nanette, their two sons Ian and Dane, and their dog Lenny.

“I create narrative figurative paintings in oil and acrylic on canvas. My subjects focus on pop culture and narratives that offer a tinge of pun-heavy humor, with nuances and metaphorical qualities. Most of my subjects derive from pop culture and my love and knowledge of cinema and music, primarily from the 1920s through the 1940s, a time that is classically known for its fashion, cinema, and politics. I often use reference photographs, either taken by myself or chosen from public domain sites. I consider the public domain photographs as hidden gems from our past, buried in time, and my goal is to give them a new life, a new appreciation and the attention I feel they deserve. My goal is two fold: to honor the iconic images that have shaped film history and to keep alive these moments and performers for future generations.

I love the timeless quality created by subjects in scenes like bars or other settings that create a narrative. I often take a humorous approach with the narrative, whether it’s a slight nuance in the details, use of metaphor, crossing artistic genres, or blending time periods. I’m known to place myself as a subject reference for my painting- first posing myself in a scene and photographing it for painting later. This sometimes creates humorous situations in the art-making process, a parallel to my love for cinema.

German expressionism and universal horror are two of my favorite genres of cinema. I approach my work like it’s a german expressionist film, a genre most recognizable for its sharp camera angles and deep shadows. My influences are first and foremost films, stretching from the silent films of the 1920’s to exploitation films of the 1970’s. Inspiration for my paintings comes from images from films by directors such as Fritz Lang, Jean Luc-Godard, Akira Kurosawa, Stanley Kubrick, and Martin Scorsese. In comic books, work by Gene Colan, Alex Ross and Lee Bermejo are favorites. Artists I most admire are Frank Frazetta, Skip Liepke, Edward Hopper, Gregory Manchess, James Bama and Kent Williams.“        - Kevin Peddicord